The Church of The Good Shepard, Four Marks

When not performing I love to keep active and have had a parallel career working in the fitness industry.  For over 10 years I have taught various classes including group exercise, pilates and aquatic fitness.  In 2009 I was given the opportunity to join the training team for ZUMBA Fitness as an Education Specialist.

For more information regarding this please visit my ZUMBA Instructor Website:

I have appeared in both TV and film most recently in last Christmas' episode of Miranda on BBC1 as a Zumba Instructor.  Previously to this other credits include:  The Sugar Plum Fairy for UK Food, Office Worker in DTi Ad for Postal Fraud, Teenager in Love Bites for LWT and a Party Guest in Stephen Fry's movie Bright Young Things.

I feel privileged and blessed to be able to follow my dreams and touch others through music and song.

I spent three years studying Musical Theatre & Theatre Dance at the world renowned Arts Educational School of Musical Theatre in London.  Whilst there I played parts including Aunt Eller in Oklahoma!  Jack's Mother in Into The Woods and Anita in West Side Story at the Cannizaro Park Open Air Theatre Wimbledon 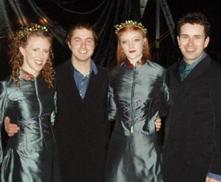 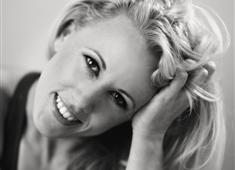 After graduation I joined the International phenomenon Riverdance as a Principal Singer and toured The US, Europe and UK. Other performance credits include: Young Stella in the Landor Theatre's highly acclaimed production of Stephen Sondheim's Follies, Cassie in A Chorus Line, Gaiety Theatre Isle of Man, Chrissie in Camp Horror , Yvonne Arnaud Theatre Guildford and Gail in Teechers, Barons Court Theatre, London.

No Christmas was ever complete without Pantomime! After making my professional stage debut at the age of 9 in Robinson Crusoe, Yvonne Arnaud Theatre Guildford I have worked my way up from the children's chorus to the ensemble, to the back end of Daisy The Cow in Jack & The Beanstalk to principal boy on numerous occasions:  Jack at Theatre Royal Winchester and Bedworth Civic Theatre, Prince Charming in Cinderella, Stafford Gatehouse Theatre and understudying and playing Mrs Darling in Peter Pan, Theatre Royal Windsor.

I currently live back in my home town of Guildford surrounded by family, friends and the beautiful Surrey countryside.